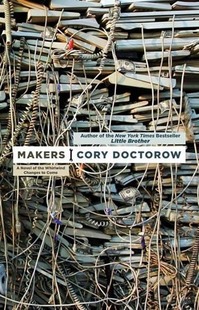 (p. A19) Consider the world of “Makers,” the latest by best-selling writer Cory Doctorow. This novel is set in a not-too distant future, when the creative destruction of technological change has created an economy so efficient, with profit margins so thin, that traditional companies can hardly stay in business.

The inventor-heroes of “Makers” take technology to its conclusion: They figure out a way to use three-dimensional printers to produce copies of machines and most anything else at close to no cost. This sparks “New Work,” with geeky investment bankers scouring the country to fund promising artisans who use the technology to build things cheaply. The heroes also run a series of entertainment rides across the country in abandoned Wal-Marts, until Disney unleashes its lawyers on them.
Mr. Doctorow, a Canadian living in London, has a keen eye for the pressures on contemporary business. In the novel, an M.B.A. brought in to work with the inventors explains, “The system makes it hard to sell anything above the marginal cost of goods, unless you have a really innovative idea, which can’t stay innovative for long, so you need continuous invention and reinvention, too.”
. . .
In the world of “Makers,” and perhaps in our own world, “we’re approaching a kind of pure and perfect state now, with competition and invention getting easier and easier–it’s producing a kind of superabundance.”
Mr. Doctorow paints a bleak picture of the process of getting there, even if many of us take a more benign view of increasingly efficient capitalism. “Makers” features widespread unemployment, with 20% of workers relocating to look for jobs. Even with scientific advances–obesity is solved, for example–life is brutal. There are squatter neighborhoods alongside abandoned strip malls.