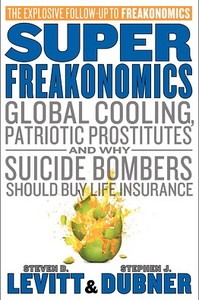 (p. A19) Suppose for a minute–. . . –that global warming poses an imminent threat to the survival of our species. Suppose, too, that the best solution involves a helium balloon, several miles of garden hose and a harmless stream of sulfur dioxide being pumped into the upper atmosphere, all at a cost of a single F-22 fighter jet.

The hose-in-the-sky approach to global warming is the brainchild of Intellectual Ventures, a Bellevue, Wash.-based firm founded by former Microsoft Chief Technology Officer Nathan Myhrvold. The basic idea is to engineer effects similar to those of the 1991 mega-eruption of Mt. Pinatubo in the Philippines, which spewed so much sulfuric ash into the stratosphere that it cooled the earth by about one degree Fahrenheit for a couple of years.
Could it work? Mr. Myhrvold and his associates think it might, and they’re a smart bunch. Also smart are University of Chicago economist Steven Levitt and writer Stephen Dubner, whose delightful “SuperFreakonomics”–the sequel to their runaway 2005 bestseller “Freakonomics”–gives Myhrvold and Co. pride of place in their lengthy chapter on global warming. Not surprisingly, global warming fanatics are experiencing a Pinatubo-like eruption of their own.
. . .

. . . , Messrs. Levitt and Dubner show every sign of being careful researchers, going so far as to send chapter drafts to their interviewees for comment prior to publication. Nor are they global warming “deniers,” insofar as they acknowledge that temperatures have risen by 1.3 degrees Fahrenheit over the past century.
But when it comes to the religion of global warming–the First Commandment of which is Thou Shalt Not Call It A Religion–Messrs. Levitt and Dubner are grievous sinners. They point out that belching, flatulent cows are adding more greenhouse gases to the atmosphere than all SUVs combined. They note that sea levels will probably not rise much more than 18 inches by 2100, “less than the twice-daily tidal variation in most coastal locations.” They observe that “not only is carbon plainly not poisonous, but changes in carbon-dioxide levels don’t necessarily mirror human activity.” They quote Mr. Myhrvold as saying that Mr. Gore’s doomsday scenarios “don’t have any basis in physical reality in any reasonable time frame.”
More subversively, they suggest that climatologists, like everyone else, respond to incentives in a way that shapes their conclusions. “The economic reality of research funding, rather than a disinterested and uncoordinated scientific consensus, leads the [climate] models to approximately match one another.” In other words, the herd-of-independent-minds phenomenon happens to scientists too and isn’t the sole province of painters, politicians and news anchors

For the full commentary, see:
BRET STEPHENS. “Freaked Out Over SuperFreakonomics; Global warming might be solved with a helium balloon and a few miles of garden hose.” The Wall Street Journal (Tues., OCTOBER 27, 2009): A19.
(Note: ellipsis added.)