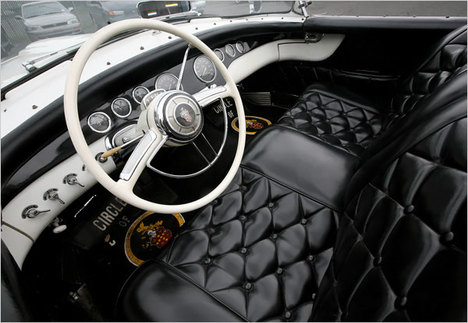 The steering wheel of the 1954 Packard Panther. Source of photo: online version of the NYT article quoted and cited below.

(p. 11) The company may have started on a dare, according to “Packard: A History of the Motor Car and the Company,” edited by Beverly Rae Kimes (Automobile Quarterly Publications, 2002).

After graduating from Lehigh University’s engineering school and returning home to Warren, Ohio, James Ward Packard considered buying his first car, a Winton. When Packard asked for some special features, he got this response from Alexander Winton: “The Winton waggon (sic) as it stands is the ripened and perfected product of many years of lofty thought … and could not be improved in any detail. If Mr. Packard wants any of his own cats and dogs worked into a waggon, he had better build it himself.”
Despite the rude reply, Packard bought the car, but it broke down often. Commiserating over dinner with George Weiss, a friend (and Winton stockholder), Packard decided to take Winton’s words seriously. It must have been an especially satisfying day for Packard on June 17, 1899, when Weiss sold his Winton stock and invested in Packard’s new business, soon to be named the Ohio Automobile Company.
Although its first cars looked conventional, they had some unusual features. It was one of a few cars with an accelerator pedal, and its H-gate gearshift pattern, a Packard patent, was widely used in later years.
Packard’s reputation for reliability and durability was established with its model A and B cars, but the company did not stop development there, even taking the lessons of early mishaps to improve subsequent vehicles.
During the summer of 1900, a model B swerved into a ditch after hitting a pothole — a hazard on cars with tiller steering, as the impact could jerk the steering lever from the driver’s grasp — injuring the passenger and damaging the car. Packard started work on a solution; when the model C was introduced later that year, it featured the industry’s first steering wheel.
. . .
After flirting with Nash in the early 1950s, Packard purchased Studebaker in 1954 (which explains why the Packard Predictor resides in the Studebaker Museum). Studebaker was larger but struggling. The merger hastened the end of both makes.
Still, Packard left its mark on the American auto industry.

For the full story, see:
ROBB MANDELBAUM. “Collecting; Packard’s Visions of the Future, When It Still Had One .” The New York Times, SportsSunday Section (Sun., September 10, 2009): 11.
(Note: ellipsis added.)