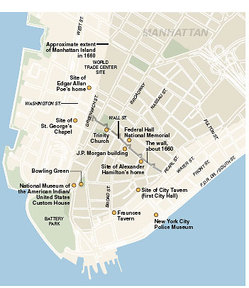 “New York City’s history begins in the small space below Wall Street.” Source of caption and map: online version of the NYT article quoted and cited below.

(p. 34) Bowling Green was then part of “a parade ground where soldiers practiced maneuvers,” he continued. “That very quickly turned into a market space where farmers in outlying districts brought their produce to sell. It became a famous place for prostitutes to haunt in the evening. And in the early 18th century it was where people played lawn bowling.”

From the start, Mr. Caldwell said, it was a party town, known for its many taverns, “the all-purpose repositories of night life. There were theatrical performances, dancing, gambling and concerts.”
In 1979 and 1980 archaeologists dug for the remains of two famous taverns that had stood on Pearl Street near Coenties Slip. Transparent panels in the plaza along Pearl Street display part of the stone foundation they found of the King’s House tavern (also known as Lovelace Tavern), built in 1670. Light-colored paving stones nearby outline the modest footprint of the City Tavern (Stadt Herbergh), built in 1641. In 1653 it also became the first City Hall, the Stadt Huys. And it contained a jail.
“So you could, in one day, go from sitting on a court case to a drunken debauch to jail, without ever leaving this little place where we’re standing,” Mr. Caldwell noted.
A few blocks north, at what was then the edge of the city, the Dutch built a defensive wall across the island in 1653. Like Fort Amsterdam, it proved of no use when the British seized New Amsterdam in 1664 and renamed it New York.
“It was essentially an earthwork with a wooden palisade on top,” explained Steve Laise, the National Parks Service’s chief of cultural resources for Federal Hall National Memorial, a Greek Revival landmark on Wall Street. Today’s Wall Street follows the dirt lane that was just inside this defense. “When you walk on Wall Street, you’re literally walking in the footsteps of the burghers of New Amsterdam,” Mr. Laise said.