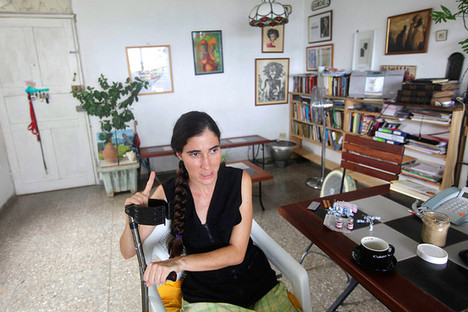 “Blogger Yoani Sánchez speaks at home in Havana on Monday, days after she says she was beaten by Cuban agents.” Source of caption and photo: online version of the WSJ article quoted and cited below.

(p. A14) Yoani Sánchez, Cuba’s most prominent dissident blogger, was walking along a Havana street last Friday along with two other bloggers and a friend when two men she says were Cuban agents in civilian clothes forced her inside an unmarked black car and beat her, telling her to stop criticizing the government.

The assault, believed to be the first against the growing blogger movement on the island, has cast a spotlight on the country’s record of repression, highlighting how little change there has been in political freedoms during the nearly three years since Raúl Castro took over as president from retired dictator Fidel Castro.
A decline in tourism revenues from the global recession and damage from several hurricanes last year have prompted the island’s government to clamp down even harder on dissent and freedom of speech, according to a recent report by the Inter American Press Association, a watchdog group.
The group said Cuba currently has 26 journalists in jail, and it cited 102 incidents against Cuban journalists in the past year, including beatings, arbitrary arrests and death threats.