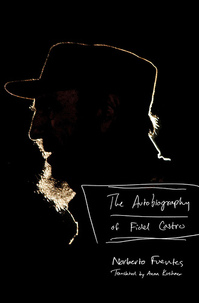 (p. C1) The plethora of dictators, despots and revolutionaries-turned-authoritarians south of the border has spawned a genre of literature that might be called the Latin American Strongman Novel — a genre that includes harrowing novels based on real historical figures, like Mario Vargas Llosa’s dazzling “Feast of the Goat” (which depicted Rafael Trujillo’s devastating rule over the Dominican Republic) and more mythic creations, like Gabriel García Márquez’s “Autumn of the Patriarch,” that have employed the sorcery of magical realism to conjure larger-than-life fictional tyrants in a panoply of ruthlessness, audacity and corruption.

The latest in this tradition of books is Norberto Fuentes’s fascinating new novel, “The Autobiography of Fidel Castro,” which purports to tell the longtime Cuban leader’s story in his own words. The “self-portrait” that emerges from these pages is that of a Machiavellian survivor: an egomaniac who identifies himself with the revolution but who is loyal not to a cause, not to an ideology, not to his compatriots, but only to his own ambition.
This Fidel is narcissistically longwinded, like his real-life counterpart. He is also a self-mythologizing change agent who succeeds in making himself “the neurological center of an entire nation” — a wily Nietzschean operator who believes in the force of his own will, while sensing that “the chameleon is going to last longer under his rock than the lion, despite its roaring and lean muscles.” He is a cynical master of manipulation and strategic maneuvering, a skilled practitioner of the black arts of propaganda and gamesmanship who always wants “to keep people guessing.”
A journalist and Hemingway (p. C7) scholar, Mr. Fuentes was once a cheerleader of the revolution and part of Mr. Castro’s inner circle himself. He grew disillusioned with the Cuban leader, however, after two army officers were executed in 1989 on what many believe were trumped-up charges. Mr. Fuentes fell out of favor, came under government surveillance and was detained after a failed attempt to flee Cuba by boat. After a hunger strike and the intervention of Mr. García Márquez, he was allowed to leave the country in 1994, and has since denounced Mr. Castro for his “absolute personal dictatorship” and willingness “to do anything necessary to stay in power.”

“Norberto Fuentes” Source of caption and photo: online version of the NYT article quoted and cited above.