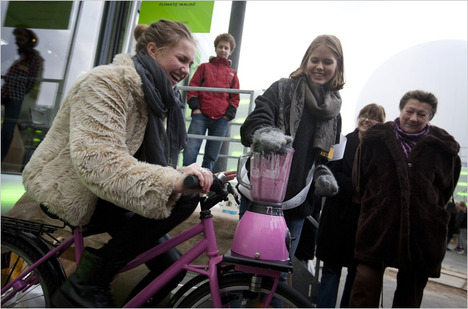 “Environmental displays in Copenhagen’s City Hall Square include pedal-powered smoothies.” Source of caption and photo: online version of the NYT article quoted and cited below.

I mainly liked the article cited below for the photo displayed above.
But there also was this bit, showing that beyond some silly green pretensions, not all is rotten in Denmark:

(p. A11) . . . , cracks in Copenhagen’s green facade were easy to spot on Friday at the nearby Stroget, a popular car-free shopping area in the city center. In the late afternoon every shop door was propped open, sending clouds of heated air into the chilly street.

Some cities impose fines on shopkeepers who allow excess energy to escape through open doors.
But Jan Michael Hansen, the executive director of Copenhagen City Center, an organization representing shops along the three-quarter-mile-long corridor, was nonplused. A closed door keeps customers away, which is bad for business, he explained.
He seemed puzzled that the visitor brought it up. “I have never had an inquiry like this before,” he said.