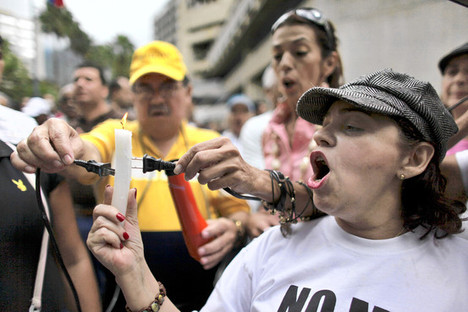 “In Venezuela, which faces power shortages, blackouts have spurred protests like this demonstration in Caracas.” Source of caption and photo: online version of the WSJ article quoted and cited below.

(p. A11) CARACAS — Venezuela, a country with vast reserves of oil and natural gas, as well as massive rushing waterways that cut through its immense rain forests, strangely finds itself teetering on the verge of an energy crisis.
. . .
The government has forced draconian electricity rationing on certain sectors, which could make matters worse for an economy already racked by recession. Critics say the socialist government is trying to snuff out capitalist-driven sectors with the rationing, while allowing government-favored industries in good standing to continue with business as usual.
Shopping malls, which analysts say use less than 1% of the power consumed in Venezuela, have nonetheless been a main focus for the government.
Malls have been told most stores can only be open between 11 a.m. and 9 p.m.
“In a certain way, Chávez is attacking capitalism with the orders on shopping malls,” said Emilio Grateron, mayor of Caracas’s Chacao municipality, a bastion of those opposed to Mr. Chávez. “By limiting the hours we can go to malls, he is trying to slowly take away liberties, to create absolute control over things such as shopping.”
In Venezuela, whose capital Caracas is consistently ranked among the world’s most dangerous cities, residents see shopping malls as one of few havens in the country.
The government’s rationing efforts are also hitting metal producers. Their production has already been cut as much as 40%. Mr. Rodriguez, the electricity minister, said they may have to be completely closed to save more electricity.