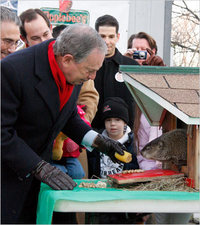 “Will there be six more weeks of winter? Will Chuck mind his manners at the Staten Island Zoo? Will Mayor Michael R. Bloomberg pull this stunt again? The answers are uncertain. It is clear, though, that the mayor can be persistent in the face of hostility.” Source of the caption and the photo: online version of the NYT article quoted and cited below.

(p. A20) There are creatures — hibernating bears come to mind, or emergency-room doctors after an overnight shift — who don’t appreciate being roused from their slumber. Perhaps that’s what irked Chuck the Groundhog on Monday morning on Staten Island when Mayor Michael R. Bloomberg tried to lure him out of his wooden shelter.

Chuck wasn’t up for whatever it was that Mr. Bloomberg had planned for him — or for predicting how much longer winter was going to last, for that matter. And he got so annoyed at the mayor that he bit the mayor’s left hand, his sharp teeth piercing Mr. Bloomberg’s black leather gloves.
One can argue that Mr. Bloomberg sort of asked for it. As cameras rolled and the crowd took in the event — a local imitation of the Punxsutawney Phil tradition — Chuck at first refused to come out. Children chanted his name to no avail. Mr. Bloomberg seemed to realize that the reclusive rodent was spoiling the show.
He tried to lure Chuck out of his cottage with an ear of corn, but Chuck shrewdly grabbed the corn and dragged it inside to enjoy. The mayor tried again, twice, but then, seemingly out of patience, he grabbed Chuck by the belly with both hands before he could hide again and held him up in the air for everyone to see.
By then, the mayor had already been bitten.