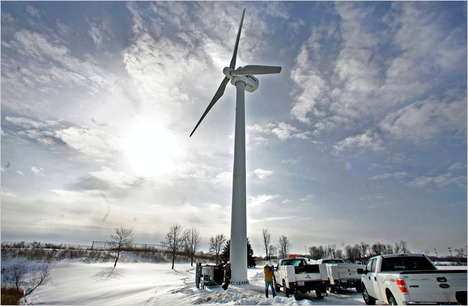 “Inspecting a windmill in Chaska, Minn. The blades on some in the area have been stationary.” Source of caption and photo: online version of the NYT article quoted and cited below.

(p. A12) For those who suspect residents in places like Minnesota of embellishment when it comes to their tales of bitterly cold winter weather, consider this: even some wind turbines, it seems, cannot bear it.

Turbines, more than 100 feet tall, were installed last year in 11 Minnesota cities to provide power, and also to serve as educational symbols in a state that has mandated that a quarter of its electricity come from renewable resources by 2025.
One problem, though: The windmills, supposed to go online this winter, mostly just sat still, people in cities like North St. Paul and Chaska said, rarely if ever budging. Residents took note. Schoolchildren asked questions. Complaints accumulated.
“If people see a water tower, they expect it to stand still,” said Wally Wysopal, the city manager of North St. Paul. “If there’s a turbine, they want it to turn.”
No one knows for sure why these turbines do not. Officials believe there may be several reasons, but weather is the focus of much speculation.