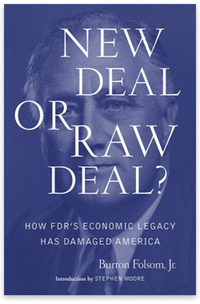 FDR has never been one of my heroes. But in the last few years, I have read two books that have revealed him to have been much worse than I expected. In earlier posts, I have praised Amity Shlaes’ The Forgotten Man.
Here I praise Burt Folsom’s New Deal or Raw Deal?
Folsom documents how the economic policies of Roosevelt lengthened and deepened the Great Depression.
But what I think I will remember most about the book, is the example after example of how FDR lied to both friend and foe; and the example after example of how FDR used government spending programs to buy votes.
I found this book very unpleasant. Rather than listen to another chapter in the car, I sometimes found myself playing music.
But we need to read this book. We need to know what really happened, so we can guard against it happening again.
In the next few weeks, I will quote a few of the more memorable and significant passages in Folsom’s book.