“Titan Cement’s Bob Odom in March at the site of a proposed plant near Wilmington, N.C. The company says hundreds of jobs would be created.” Source of book image: online version of the WSJ review quoted and cited below.

Is it just me, or does entrepreneur Lloyd Smith, quoted below, come across as a bit arrogant in believing the government should enforce his view of what Wilmington should be like, even if that means violating the property rights of the owner of the land on which the cement plant will be built? (And even if that means that would-be janitor Ron Givens remains unemployed.)

(p. A3) WILMINGTON, N.C.–The old economy and the new economy are squaring off in this coastal city, which is having second thoughts about revisiting its roots in heavy industry.

Titan Cement Co. of Greece wants to build one of the largest U.S. cement plants on the outskirts of the city and is promising hundreds of jobs. The factory would be on the site of a cement plant that closed in 1982 and today is populated mainly by fire ants, copperhead snakes and the occasional skateboarder.
The proposed $450 million plant by Titan America LLC, Titan’s U.S. unit, is welcome news to Ron Givens Sr., a 44-year-old unemployed Wilmington native. Mr. Givens’s father supported 12 children while working at the former Ideal Cement plant, and Mr. Givens and two brothers have now applied for jobs with Titan. “I will apply for janitor if that’s what is going to get me into that plant,” he said.
But thousands of opponents have petitioned local and state politicians to block the plan. They object to the emissions from the plant and say it will scare off tourists, retirees, entrepreneurs and others who might otherwise want to live here.
An initial state environmental review has dragged on for two years, and critics of the plant have filed a lawsuit seeking to further broaden the review. The governor, amid public pressure, has asked the State Bureau of Investigation to probe the plant’s permitting process.
“That’s their tactic: Delay, delay, and at some point Titan will leave,” said Bob Odom, Titan’s general manager in Wilmington, of opposition efforts.
Among the most vocal opponents is a fast-growing class of high-tech entrepreneurs and telecommuters who moved to Wilmington in recent years, drawn to the temperate climate, sandy beaches and good fishing. They argue the plant, by curbing the community’s appeal, will cost more jobs and tax revenue in the long run than it produces.
“I think we can be discriminating,” said Lloyd Smith, a 43-year-old entrepreneur who moved here from northern Virginia in 2001 and founded Cortech Solutions Inc., a neuroscience company with nine employees and about $5 million in annual sales.
The standoff in Wilmington reflects a broader tug-of-war across the country as communities try to kick-start employment. It is unclear how much manufacturing will power the long-term U.S. economic recovery–even in southern states that have long embraced heavy industry but have begun to feel the new economy’s pull.

For the full story, see:
MIKE ESTERL. “Clash of Old, New Economy; Cement Plant Is Resisted by Some Neighbors Who Would Rather Lure High-Tech Jobs.” The Wall Street Journal (Tues., April 6, 2010): A3. 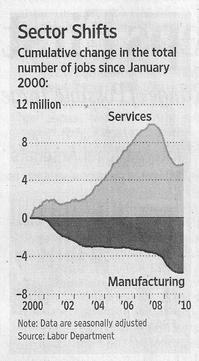 Source of graph: scanned from print version of the WSJ article quoted and cited above.

2 thoughts on “Not All Entrepreneurs Believe in Property Rights”