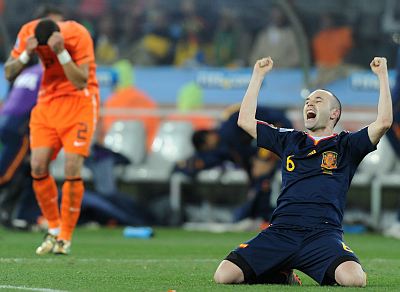 The Wall Street Journal on 7/12/2010 ran the above photo on the top of its front page and referred to articles inside on the final game of the 2010 World Cup. Their caption was: “120 minutes, a record 13 yellow cards and a single goal: Andrés Iniesta, right, celebrates scoring to beat the Netherlands in the World Cup; Dutch player Gergory van der Wiel, left, buries his face.” Source of photo: http://www.zumapress.com/images/SIGMA/IMAGES312/20100711_zaf_d20_347.pre (sic)

What a beautiful picture for illustrating a zero-sum game. Football (or soccer) is a zero-sum game—Spain can only win, if the Netherlands lose.
Capitalism is sometimes compared to sports, because both involve competition. In the short-run competition of capitalism, sometimes one “team” wins and another “team” loses. But in the longer run, the essential fact about capitalism is not competition, but innovation. And in the longer run triumph of innovation, all can win.
When Ghiberti and Brunelleschi competed to build the Gates of Paradise, Ghiberti ended up building the doors. But it would be a mistake to see him as the winner and Brunelleschi as the loser. Brunelleschi moved on to build the Duomo, and everyone won.