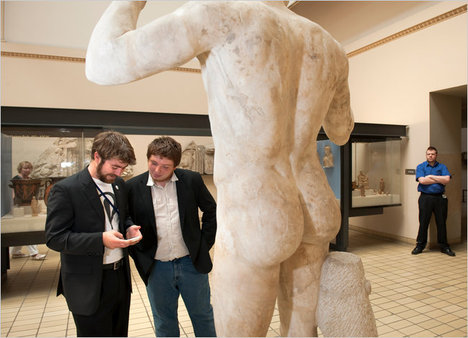 “Two visitors from Wikipedia, Liam Wyatt, left, and Joseph Seddon, at the British Museum.” Source of caption and photo: online version of the NYT article quoted and cited below.

(p. C1) The British Museum has begun an unusual collaboration with Wikipedia, the online, volunteer-written encyclopedia, to help ensure that the museum’s expertise and notable artifacts are reflected in that digital reference’s pages.

About 40 Wikipedia contributors in the London area spent Friday with a “backstage pass” to the museum, meeting with curators and taking photographs of the collection. And in a curious reversal in status, curators were invited to review Wikipedia’s treatment of the museum’s collection and make a case that important pieces were missing or given short shrift.
Among those wandering the galleries was the museum’s first Wikipedian in residence, Liam Wyatt, who will spend five weeks in the museum’s offices to build a relationship between the two organizations, one founded in 1753, the other in 2001.
“I looked at how many Rosetta Stone page views there were at Wikipedia,” said Matthew Cock, who is in charge of the museum’s Web site and is supervising the collaboration with Wikipedia. “That is perhaps our iconic object, and five times as many people go to the Wikipedia article as to ours.”
In other words, if you can’t beat ’em, join ’em.
Once criticized as amateurism run amok, Wikipedia has become ingrained in the online world: it is consulted by millions of users when there is breaking news; its articles are frequently the first result when a search engine is used.
. . .
(p. C6) Getting permission to work with Wikipedia was not as hard a sell as he expected, Mr. Cock said. “Everyone assumed everyone else hated it and that I shouldn’t recommend it to the directorate,” he said. “I laid it out, put a paper together. I won’t say I was surprised, but I was very pleased it was very well received.”
He said he had enthusiastic support from four departments, including Greek and Roman antiquity and prints and drawings. “I don’t think it is just the young curators,” he added.