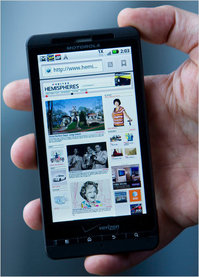 “The Droid X is the latest “best Android phone on the market.”” Source of caption and photo: online version of the NYT article quoted and cited below.

(p. B1) You think technology moves too fast now? You think your camera, camcorder and computer become obsolete quickly?