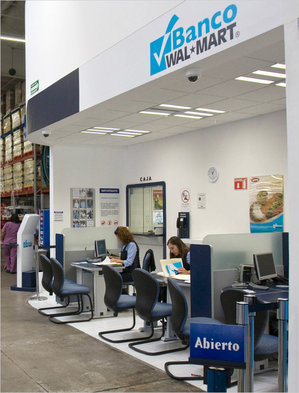 “Banco Wal-Mart plans to open more than 160 branches in Mexico this year.” Source of caption and photo: online version of the NYT article quoted and cited below.

(p. B2) Banco Wal-Mart plans to open more than 160 branches in Mexico this year, nearly doubling its presence south of the border. Wal-Mart Canada Bank also opened this month. It is offering a credit card and may make loans, including mortgages.

As Wal-Mart has done with retail in America, a Wal-Mart bank could be a disciplining force in keeping down costs for customers. It could also act as an engine of credit creation for a significantly underbanked subset of the American populace.
The Federal Deposit Insurance Corporation estimates that 60 million Americans, most of them low-income, are underserved by local community banks and wind up using usurious check cashers, payday lenders and pawnbrokers for financial services.
. . .
As part of the financial reform legislation, bankers have supported a three-year freeze on new applications for industrial loan corporations, the charter Wal-Mart would need.
That runs contrary to the supposed spirit of reform that seeks to empower and protect consumers. Greater competition, coupled with sounder regulatory supervision, would help accomplish that. And Wal-Mart could be its catalyst.