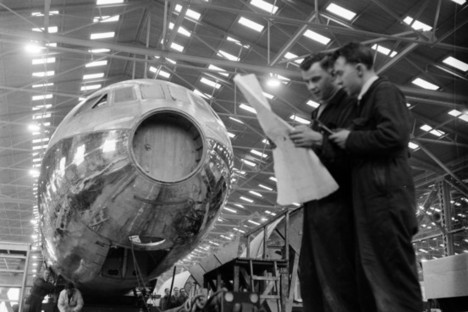 “When Britain Ruled The Skies: A De Havilland Comet under construction in Belfast in 1954.” Source of caption and photo: online version of the WSJ review quoted and cited below.

(p. C8) Frank Whittle, the brilliant British military pilot and engineer who began patenting jet designs in 1930, struggled for years to get funding and time to pursue his idea. Even after World War II, when a competing Nazi design showed what fighter jets could achieve in battle, U.S. airlines were slow to see jets’ potential for passenger travel.

It took another Brit, airplane designer Geoffrey de Havilland, to awaken postwar America’s aviation behemoths. While Lockheed and Douglas were still churning out rumbling, low-flying propeller planes, De Havilland’s jet-powered Comet began breaking records in 1952. Only after seeing Comets scorch the stratosphere at 500 miles an hour did Howard Hughes want jetliners for TWA and Juan Trippe get interested for Pan Am.
Among American plane makers, it was a military contractor that had struggled in the prewar passenger-plane market–Boeing–that first took up the jetliner challenge. In retrospect, the outcome seems obvious. The Boeing 707 inspired the term “jet set.” Boeing’s iconic 747 “Jumbo Jet” opened jet-setting to the masses.
But in 1952, that outcome was far from obvious. Mr. Verhovek zeroes in on the mid-1950s, when Comets first seemed to own the world and then started plunging from the sky in pieces. The Comet’s fatal design flaw–the result of an insufficient appreciation of the danger of metal fatigue–holds resonance today as both Boeing and Airbus struggle to master the next generation of jetliner materials, composites of carbon fiber and plastic.
. . .
Although “Jet Age” inevitably centers on technology, Mr. Verhovek wisely focuses as well on the outsize personalities behind world-changing innovations. There’s Mr. De Havilland, a manic depressive who was so dedicated to aviation that he kept going after two of his three sons died testing his planes. Mr. Whittle, we learn, sniffed Benzedrine to stay awake, popped tranquilizers to sleep and shriveled to just 127 pounds while developing the jet engine. And Boeing chief executive Bill Allen, a meticulous lawyer, bet the company on passenger jets when not a single U.S. airline wanted one.