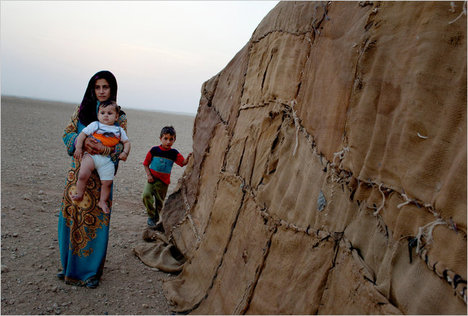 “Refugees have left their farmlands and are living in tents in Ar Raqqah, Syria, because of a drought.” Source of caption and photo: online version of the NYT article quoted and cited below.

(p. A1) AR RAQQAH, Syria — The farmlands spreading north and east of this Euphrates River town were once the breadbasket of the region, a vast expanse of golden wheat fields and bucolic sheep herds.

Now, after four consecutive years of drought, this heartland of the Fertile Crescent — including much of neighboring Iraq — appears to be turning barren, climate scientists say. Ancient irrigation systems have collapsed, underground water sources have run dry and hundreds of villages have been abandoned as farmlands turn to cracked desert and grazing animals die off. Sandstorms have become far more common, and vast tent cities of dispossessed farmers and their families have risen up around the larger towns and cities of Syria and Iraq.
“I had 400 acres of wheat, and now it’s all desert,” said Ahmed Abdullah, 48, a farmer who is living in a ragged burlap and plastic tent here with his wife and 12 children alongside many other migrants. “We were forced to flee. Now we are at less than zero — no money, no job, no hope.”
. . .
(p. A17) The drought has become a delicate subject for the Syrian government, which does not give foreign journalists official permission to write about it or grant access to officials in the Agriculture Ministry. On the road running south from Damascus, displaced farmers and herders can be seen living in tents, but the entrances are closely watched by Syrian security agents, who do not allow journalists in.
Droughts have always taken place here, but “the regional climate is changing in ways that are clearly observable,” said Jeannie Sowers, a professor at the University of New Hampshire who has written on Middle East climate issues. “Whether you call it human-induced climate change or not, much of the region is getting hotter and dryer, combined with more intense, erratic rainfall and flooding in some areas. You will have people migrating as a result, and governments are ill prepared.”
The Syrian government has begun to acknowledge the scale of the problem and has developed a national drought plan, though it has not yet been put in place, analysts say. Poor planning helped create the problem in the first place: Syria spent $15 billion on misguided irrigation projects between 1988 and 2000 with little result, said Elie Elhadj, a Syrian-born author who wrote his Ph.D. dissertation on the topic. Syria continues to grow cotton and wheat in areas that lack sufficient water — making them more vulnerable to drought — because the government views the ability to produce those crops as part of its identity and a bulwark against foreign dependence, analysts say. 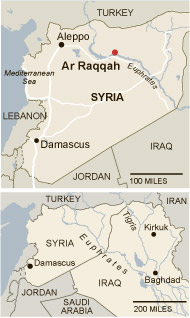 Source of maps: online version of the NYT article quoted and cited above.