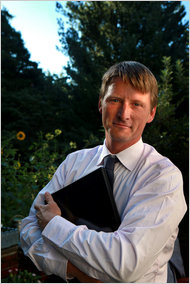 “Jonathan Bush, nephew of one former president and cousin of another, built a small medical practice into a national enterprise with nearly 1,200 employees.” Source of caption and photo: online version of the NYT article quoted and cited below.

(p. B10) In the world of health care innovation, the founder and chief executive of Athenahealth has an outsize name. In part, that’s because his name is Jonathan Bush, and he is the nephew of one former president and the cousin of another. But it’s also because his company has mastered the intricacies of the doctor-insurer relationship and become a player in the emerging medical records industry.

Based in Watertown, Mass., Athenahealth offers a suite of administrative services for medical practices. It collects payments from insurers and patients, and it manages electronic health records and patient communication systems. All of this is done remotely through the Internet — or “in the cloud,” as Mr. Bush puts it. Doctors don’t have to install or manage software or pay licensing fees; instead, Athenahealth keeps a percentage of the revenue.
. . .
Q. What’s going on in the health care industry to deliver that kind of growth to you?
A. We are a disruptive technology. We are the only cloud-based service in an industry segment full of sclerotic, enormous, personality-free corporations that have been in business making 90 percent margins doing nothing for decades and decades.
Q. What keeps other companies from building cloud-based systems?
A. For software companies, the biggest barrier to entry is that they give up their business model. Those companies would get hammered on Wall Street if they started selling a service that they have to deliver at a loss for five years. In terms of new entrants, there are two things that we’ve done that would take a good decade to replicate. One, we’ve built out the health care Internet. We’ve been building connections into insurance companies and laboratories and hospital medical records for years and years and years.
And the other barrier to entry is that rules engine. Every time a doctor anywhere in the country gets a claim denied, we have analysts ask the Five Whys. When we get to root cause, we write a new rule into Athenanet and from that day on, no other doctor gets that particular denial from that particular insurance company ever again. We now know of 40 million ways that a doctor can have a claim denied in the United States. The average practice has to rework about 35 percent of their claims, and we only have to rework about 5 percent of ours.
Q. What’s the prognosis for bill collecting under health care reform?
A. Well, there’s going to be new connectors and a whole series of new insurance products that will be managed by the states’ health insurance commissioners. And the law provides for every state to do all of these its own way, so they will have their own rules and regulations, and each state will do it differently. That sounds like springtime in Complexity Land.
Q. What do you think will happen to the total cost of health care under reform?
A. Oh, it’s going to go through the roof! It’s widely accepted that this is not a cost-reform bill — it’s an access bill. It’s in fact a cost-expansion bill.