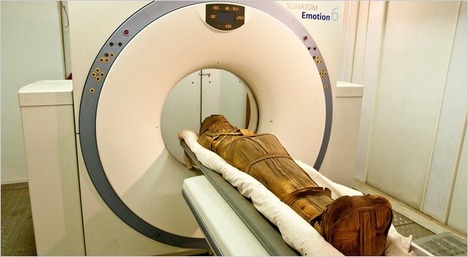 “MODERN MEETS ANCIENT. CT scans of some Egyptian mummies, like the one being done on this priest, reveal signs of atherosclerosis.” Source of caption and photo: online version of the NYT article quoted and cited below.

(p. D6) . . . a team of cardiologists used CT scanning on mummies in the Egyptian National Museum of Antiquities in Cairo to identify atherosclerosis — a buildup of cholesterol, inflammation and scar tissue in the walls of the arteries, a problem that can lead to heart attack and stroke.

The cardiologists were able to identify the disease in some mummies because atherosclerotic tissue often develops calcification, which is visible as bright spots on a CT image. The finding that some mummies had hardened arteries raises questions about the common wisdom that factors in modern life, including stress, high-fat diets, smoking and sedentary routines, play an essential role in the development of cardiovascular disease, the researchers said.
“It tells us that we have to look beyond lifestyles and diet for the cause and progression of this disease,” said Dr. Randall C. Thompson, a cardiologist at St. Luke’s Mid America Heart Institute in Kansas City, Mo., and part of the team of cardiovascular imaging specialists who traveled to Cairo last year. “To a certain extent, getting the disease is part of the human condition.”