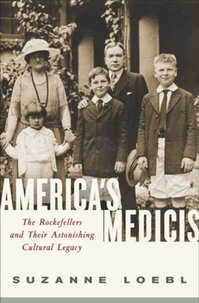 (p. C7) . . . as Suzanne Loebl rightly emphasizes in “America’s Medicis,” the Rockefellers’ patronage has been notable not only for its generosity but also for its deliberativeness. By founding such diverse institutions as MoMA, Colonial Williamsburg, the Cloisters, Riverside Church and the Asia Society–as well as by commissioning the distinguished artworks that enliven the office complex at Rockefeller Center–various members of the family have been guided by a perception that a moral responsibility comes with the possession of great wealth.

John D. Rockefeller, Sr. (1839-1937), the founder and chairman of Standard Oil, was routinely vilified in the press as a ruthless monopolist who crushed competition the way a giant might crush a bug.     . . .     . . . yet he was not the cold-hearted miser that some supposed. A devout Baptist, he donated substantial sums every year to one or more of the congregations he attended, as well as to associated causes, such as the American Baptist Education Society, which founded the University of Chicago with his support in 1890.
. . .
Unfortunately, not everyone behaved well in the face of Rockefeller munificence. The Mexican painter Diego Rivera, commissioned to create a sprawling mural for the lobby of Rockefeller Center, chose to deviate from his preparatory drawings and place an enormous portrait of Lenin at the center of the finished composition. Refusing to amend this egregious provocation, Rivera was paid in full for his work, which was then duly destroyed. A predictable uproar ensued, garnering the artist abundant publicity, which may have been his objective all along.
. . .
Ms. Loebl’s account is well grounded both in the existing literature and in original archival research. She has striven to be comprehensive and done a good job of incorporating lesser-known Rockefeller projects, for example the charming Wendell Gilley Museum of carved birds, in Maine, funded by Nelson’s son Steven. But several worthy undertakings, such as Junior’s restoration of the châteaux of Versailles and Fontainebleau, receive scant attention–as do Laurance Rockefeller’s extensive gifts for the purpose of creating and expanding our national parks.

The book being reviewed, is:
Loebl, Suzanne. America’s Medicis: The Rockefellers and Their Astonishing Cultural Legacy. New York: HarperCollins, 2010.