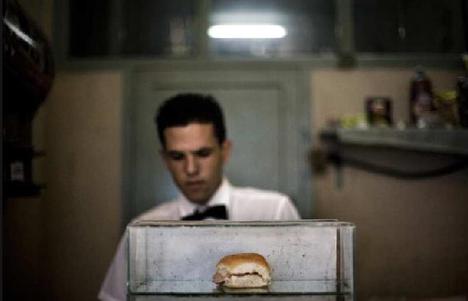 (p. A18) HAVANA–A package of capitalist reforms from President Raúl Castro is creating something new for many Cubans: uncertainty.

Since 1959, when Fidel Castro rode into Havana atop a tank, the Cuban state has promised its people the certainty of a job, food, education and health care. No one expected to get rich under the arrangement; the old joke here is that people pretend to work, and the government pretends to pay them.
. . .
On the island, where many Cubans have taken to using the word “changes,” rather than “reforms,” to refer to the restructuring, people remain cautious. Some suspect that once the economy recovers and small businesses begin to grow, the Cuban government will tighten the noose on entrepreneurs with stricter regulation and steep taxes.
A restaurant on Calle Animas offers an example of such frustrations. Opened in 1996 after an effort by Fidel Castro to jump-start the domestic economy after the collapse of the Soviet Union, it has never expanded, because of a law that limits privately owned restaurants to only 12 seats. “It’s the rules, you live by them,” the owner says.
Prices are high–about $20 for a lunch with fish from the fixed menu–largely, the owner says, because she can’t find ingredients anywhere except in underground markets, where prices are steep. Under the new rules, private restaurants will be permitted to have up to 20 seats. Still, the owner complains that state-run restaurants in the tourist district, which don’t face such restrictions, have many more than 20 seats.

For the full story, see:
A WSJ Staff Reporter. “Cubans Dip a Toe in Capitalist Waters; As State Cuts Half a Million Jobs, Future Looks Murky to Some; ‘We’re Being Left to Fend for Ourselves’.” The Wall Street Journal (Weds., October 6, 2010): A18.
(Note: ellipses added.)