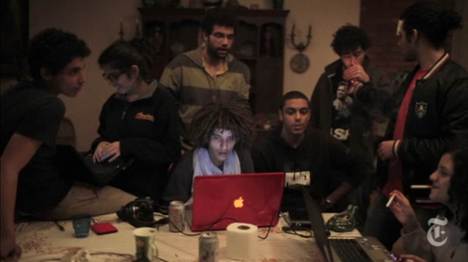 “In Cairo, Egyptian youths used laptops to post video they had shot earlier Tuesday in Tahir Square. The group has been collecting accounts of the demonstrations and voices of the protesters, putting them on social networking sites like Facebook and Twitter.” Source of caption and photo: online version of the NYT article quoted and cited below.

The photo above was at the top of the first page of the New York Times on Weds., Feb. 9, 2011. You have a group of lively, engaged, young people intoxicated with the idea that they may be helping to bring their country freedom. And in the center of the dark picture, amidst the conversations, is one youth looking with concentration at an Apple laptop, the sole source of color and illumination.
If I was Steve Jobs, I would value this one photo at more than a whole hour’s worth of Superbowl ads.

The photo above was placed above the following story on the front page of the NYT:
DAVID D. KIRKPATRICK. “As Egypt Protest Swells, U.S. Sends Specific Demands.” The New York Times (Weds., February 9, 2011): A1 & A12.
(Note: the online version of the article is dated February 8, 2011.)