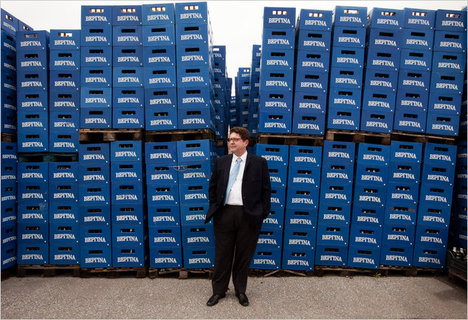 “Demetri Politopoulos at his microbrewery in northern Greece. He says Greek leaders need to do more to make the country an easier place to do business.” Source of caption and photo: online version of the NYT article quoted and cited below.

(p. 1) DEMETRI POLITOPOULOS says he has suffered countless indignities in his 12-year battle to build a microbrewery and wrest a sliver of the Greek beer market from the Dutch colossus, Heineken.

His tires have been slashed and his products vandalized by unknown parties, he says, and his brewery has received threatening phone calls. And he says he has had to endure regular taunts — you left Manhattan to start up a beer factory in northern Greece? — not to mention the pain of losing 5.3 million euros.
Bad as all that has been, nothing prepared him for this reality: He would be breaking the law if he tried to fulfill his latest — and, he thinks, greatest — entrepreneurial dream. It is to have his brewery produce and export bottles of a Snapple-like beverage made from herbal tea, which he is cultivating in the mountains that surround this lush pocket of the country.
An obscure edict requires that brewers in Greece produce beer — and nothing else. Mr. Politopoulos has spent the better part of the last year trying fruitlessly to persuade the Greek government to strike it. “It’s probably a law that goes back to King Otto,” said Mr. Politopoulos with a grim chuckle, referring to the Bavarian-born king of Greece who introduced beer to the country around 1850.
Sitting in his office, Mr. Politopoulos took a long pull from a glass of his premium Vergina wheat beer and said it was absurd that he had to lobby Greek politicians to repeal a 19th-century law so that he could deliver the exports that Greece urgently needed. And, he said, his predicament was even worse than that: it was emblematic of the web of restrictions, monopolies and other distortions that have made many Greek companies uncompetitive, and pushed the country close to bankruptcy.