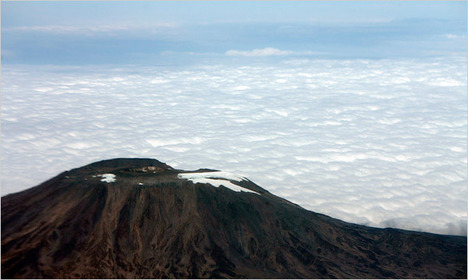 “Mount Kilimanjaro’s top, shown in June, has lost 26 percent of its ice since 2000, a study says.” Source of caption and photo: online version of the NYT article quoted and cited below.

(p. A6) The ice atop Mount Kilimanjaro in Tanzania has continued to retreat rapidly, declining 26 percent since 2000, scientists say in a new report.

Yet the authors of the study, to be published Tuesday in the Proceedings of the National Academy of Sciences, reached no consensus on whether the melting could be attributed mainly to humanity’s role in warming the global climate.
Eighty-five percent of the ice cover that was present in 1912 has vanished, the scientists said.
To measure the recent pace of the retreat, researchers relied on data from aerial photographs taken of Kilimanjaro over time and from stakes and instruments installed on the mountaintop in 2000, said Douglas R. Hardy, a geologist at the University of Massachusetts and one of the study’s authors.
. . .
. . . Georg Kaser, a glaciologist at the Institute for Geography of the University of Innsbruck in Austria, said that the ice measured was only a few hundred years old and that it had come and gone over centuries.
What is more, he suggested that the recent melting had more to do with a decline in moisture levels than with a warming atmosphere.
“Our understanding is that it is due to the slow drying out of ice,” Dr. Kaser said. “It’s about moisture fluctuation.”