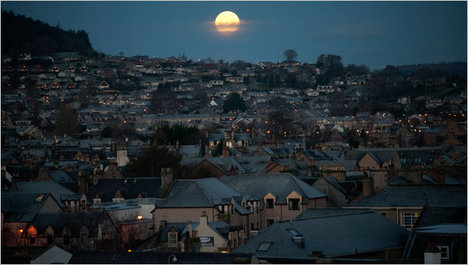 “Inverness, Scotland, at 8 a.m. Thursday. A change to year-round daylight time in Britain would make winter sunrise as late as 10 a.m. in the north.” Source of caption and photo: online version of the NYT article quoted and cited below.

(p. A7) INVERNESS, Scotland — The question was time, and whether to support legislative efforts in London to move it around in order to bring more light to the afternoons. The answer was no, said Jean Kaka, 67, a resident of this city far to the north.
. . .
“They’re trying to tamper with our time,” she said. “England is a different country than we are, and they’re imposing this on us.”
. . .
The problem is that while a clock change might bring afternoon joy to London, it would condemn Inverness in the far reaches of Scotland — in relative terms, about 700 miles north of Montreal — to long, dark winter mornings with sunrises as late as 10 a.m.
Even worse, many Scots feel, it would mean giving in to English politicians. Though the devolution of British politics has given Scotland its own legislature and responsibility for many of its own affairs, the clock is still controlled by Parliament in London.
“Certainly the people in London don’t have any real concept of the effects further north,” said Anthony Billington, 64, who was strolling through town recently. “I’m much more of a morning person, anyway.”
. . .
Robin MacDonald, 63, who owns a television store in downtown Inverness, said that while Parliament’s efforts to jump time ahead hardly mean that time is literally being stolen from him, he could do without having to set and reset his clocks twice a year.
When he was a child in the rural north, he said, he traveled to and from school in conditions “as dark as the inside of your hat.” So he doesn’t care what time legislators decide it is, as long as they decide something.
“They should make up their mind,” Mr. MacDonald said, “and then they should leave it alone.” 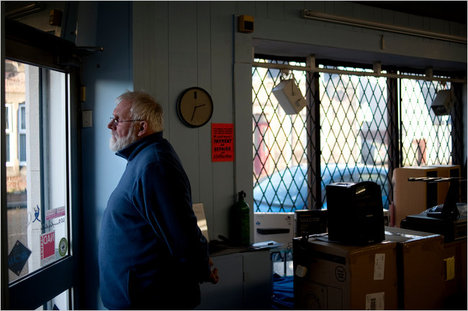 “Robin MacDonald would rather not have to reset his clocks twice a year.” Source of caption and photo: online version of the NYT article quoted and cited above.