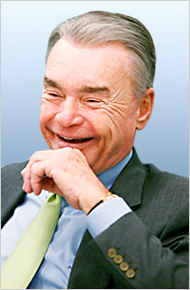 “Gordon M. Bethune, chief executive of Continental Airlines from 1994 to 2004, says that “being good at your job is predicated pretty much on how the people working for you feel.”” Source of caption and photo: online version of the NYT article quoted and cited below.

Gordon Bethune is usually given credit for introducing marginal cost pricing to the airline industry, and thereby bringing Continental Airlines back from bankruptcy.
His views on how to hire and manage employees are worth serious consideration:

A. The really good people want autonomy — you let me do it, and I’ll do it. So I told the people I recruited: “You come in here and you’ve got to keep me informed, but you’re the guy, and you’ll make these decisions. It won’t be me second-guessing you. But everybody’s going to win together. We’re part of a team, but you’re going to run your part.” That’s all they want. They want a chance to do it.