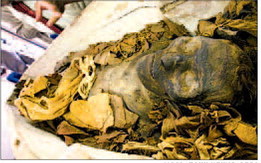 “A mummy enters the CT scanner at St. Luke’s Hospital in Kansas City, Mo. It was one of 52 mummies examined for signs of heart disease.” Source of caption and photo: online version of the Omaha World-Herald article quoted and cited below.

(p. 6A) Atherosclerosis — hardening of the arteries — was surpris­ingly widespread during an­cient times, at least among the Egyptian mummies examined by an international team of sci­entists and heart specialists.

Their research, whose re­sults were presented April 3 in New Orleans at the annual meeting of the American Col­lege of Cardiology, found that 45 percent of the mummies they put through CT scans had signs of atherosclerosis.
That raises questions about whether hardening of the arter­ies is the modern disease that many think it is.
“We found it so easily and frequently that it appears to have been common in this soci­ety,” said Randall Thompson, a cardiologist at St. Luke’s Hospi­tal in Kansas City.