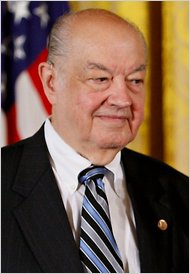 Paul Baran. Source of photo: online version of the NYT obituary quoted and cited below.

(p. A23) In the early 1960s, while working at the RAND Corporation in Santa Monica, Calif., Mr. Baran outlined the fundamentals for packaging data into discrete bundles, which he called “message blocks.” The bundles are then sent on various paths around a network and reassembled at their destination. Such a plan is known as “packet switching.”

Mr. Baran’s idea was to build a distributed communications network, less vulnerable to attack or disruption than conventional networks. In a series of technical papers published in the 1960s he suggested that networks be designed with redundant routes so that if a particular path failed or was destroyed, messages could still be delivered through another.
Mr. Baran’s invention was so far ahead of its time that in the mid-1960s, when he approached AT&T with the idea to build his proposed network, the company insisted it would not work and refused.
. . .
Mr. Baran was also an entrepreneur. He started seven companies, five of which eventually went public.
In recent years, the origins of the Internet have been subject to claims and counterclaims of precedence, and Mr. Baran was an outspoken proponent of distributing credit widely.
“The Internet is really the work of a thousand people,” he said in an interview in 2001.
“The process of technological developments is like building a cathedral,” he said in an interview in 1990. “Over the course of several hundred years, new people come along and each lays down a block on top of the old foundations, each saying, ‘I built a cathedral.’
“Next month another block is placed atop the previous one. Then comes along an historian who asks, ‘Well, who built the cathedral?’ Peter added some stones here, and Paul added a few more. If you are not careful you can con yourself into believing that you did the most important part. But the reality is that each contribution has to follow onto previous work. Everything is tied to everything else.”