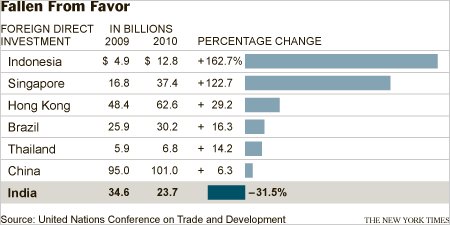 (p. B1) While inefficiency and bureaucracy are nothing new in India, analysts and executives say foreign investors have lately been spooked by a highly publicized government corruption scandal over the awarding of wireless communications licenses. Another reason for thinking twice is a corporate tax battle between Indian officials and the British company Vodafone now before India’s Supreme Court.

Meanwhile, the inflation rate — 8.2 percent and rising — seems beyond the control of India’s central bank and has done nothing to reassure foreign investors.

And multinationals initially lured by India’s growth narrative may find that the realities of the Indian marketplace tell a more vexing story. Some companies, including the insurer MetLife and the retailing giant Wal-Mart, for example, are eager to invest and expand here but have been waiting years for policy makers to let them.