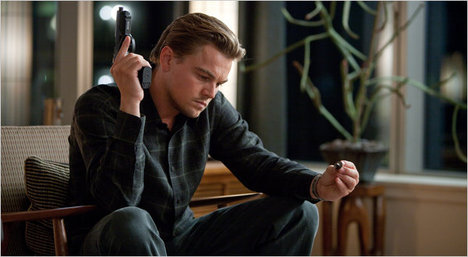 “One surprise hit was “Inception,” with Leonardo DiCaprio.” Source of caption and photo: online version of the NYT article quoted and cited below.

I thought the movie “Inception” was a wonderful, intellectual and adventure thrill ride. And if memory serves, what they were trying to instill in the conflicted inheritor of a monopoly, was that he should become more entrepreneurial.

(p. B1) As Hollywood plowed into 2010, there was plenty of clinging to the tried and true: humdrum remakes like “The Wolfman” and “The A-Team”; star vehicles like “Killers” with Ashton Kutcher and “The Tourist” with Angelina Jolie and Johnny Depp; and shoddy sequels like “Sex and the City 2.” All arrived at theaters with marketing thunder intended to fill multiplexes on opening weekend, no matter the quality of the film. “Sex and the City 2,” for example, had marketed “girls’ night out” premieres and bottomless stacks of merchandise like thong underwear.

But the audience pushed back. One by one, these expensive yet middle-of-the-road pictures delivered disappointing results or flat-out flopped. Meanwhile, gambles on original concepts paid off. “Inception,” a complicated thriller about dream invaders, racked up more than $825 million in global ticket sales; “The Social Network” has so far delivered $192 million, a stellar result for a highbrow drama.
As a result, studios are finally and fully conceding that moviegoers, armed with Facebook and other networking tools and concerned about escalating ticket prices, are holding them to higher standards. The product has to be good.