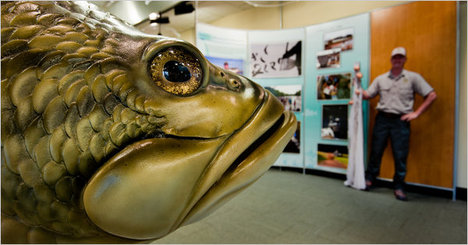 “A largemouth bass dominates the hatchery display at Go Fish Georgia Educational Center, a museum financed partly by the state and approved when the economy was more robust.” Source of caption and photo: online version of the NYT article quoted and cited below.

(p. A14) PERRY, Ga. — Every weekend, Michael Morris and his 2-year-old son, Jacob, visit this small town’s enormous new $14 million fishing museum. They watch bream and bass swim in aquarium-size tanks. They play with an interactive model of a fishing boat and try to catch fish on a computer simulation using a rod and reel connected to a video screen.

And because the museum, the Go Fish Georgia Educational Center, is primarily financed by the state, their father-and-son outings cost only $5.
. . .
But not all Georgia taxpayers are so thrilled. Even before the museum opened in October, “Go Fish” had become shorthand in state political circles for wasteful spending. Republicans and Democrats alike groaned over $1.6 million a year in bond payments and operating costs. And even supporters concede that the museum would never have gotten financed in 2007 if the legislature knew where the economy was headed.
. . .
And then there is the controversy over the museum’s location — in the home county of its main supporter, former Gov. Sonny Perdue, a Republican who left office this month after two terms.