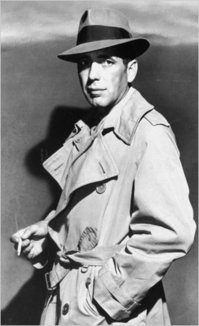 “Humphrey Bogart starred in “The Maltese Falcon” in 1941.” Source of caption and photo: online version of the NYT article quoted and cited below.

(p. C4) He was the very image of the quintessential American hero — loyal, unsentimental, plain-spoken. An idealist wary of causes and ideology. A romantic who hid his deeper feelings beneath a tough veneer. A renegade who subscribed to an unshakeable code of honor.

He was cool before cool became cool.