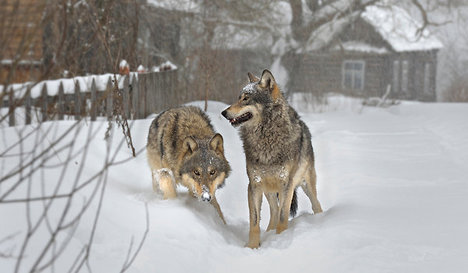 “PBS’s “Radioactive Wolves” returns to a contaminated site.” Source of caption and photo: online version of the NYT article quoted and cited below.

(p. C6) In the months since the Japanese tsunami, we’ve heard a lot about Chernobyl as a worst-case example: here’s how bad Fukushima could have been. Now PBS’s “Nature” offers another vision: Chernobyl as a best-case demonstration that life abides . . .
. . .
. . . the prognosis, coyly withheld until the end of the hour, is positive. . . . While the rate of slight birth abnormalities is twice as high as normal among the zone’s growing animal population (but still in the single digits), overall health appears to be fine. It wouldn’t be an acceptable situation for humans, but the dormice and eagles and gray wolves don’t appear to be bothered.
. . .
The concrete high-rises of the city of Pripyat sit like islands in a green sea of towering trees; plants force their way up through the floors of empty schoolrooms.
Within this strangely pastoral setting the animals go about their business, sometimes finding uses for what we’ve left behind. The wolves rise up on their hind legs to peer through the windows of houses, looking for routes to the rooftops, which they use as observation posts for hunting. Eagles build nests in fire towers.
And beavers, forced out decades ago when the landscape was engineered for collective agriculture, have already undone much of man’s work and restored one of central Europe’s great marshlands. Just think what they could do if they had the whole planet.