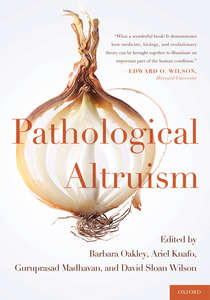 (p. D1) On entering the patient’s room with spinal tap tray portentously agleam, Dr. Burton encountered the patient’s family members. They begged him not to proceed. The frail, bedridden patient begged him not to proceed. Dr. Burton conveyed their pleas to the oncologist, but the oncologist continued to lobby for a spinal tap, and the exhausted family finally gave in.
. . .
(p. D2) . . . , Dr. Burton is a contributor to a scholarly yet surprisingly sprightly volume called “Pathological Altruism,” to be published this fall by Oxford University Press. . . .
As the new book makes clear, pathological altruism is not limited to showcase acts of self-sacrifice, like donating a kidney or a part of one’s liver to a total stranger. The book is the first comprehensive treatment of the idea that when ostensibly generous “how can I help you?” behavior is taken to extremes, misapplied or stridently rhapsodized, it can become unhelpful, unproductive and even destructive.
. . .
David Brin, a physicist and science fiction writer, argues in one chapter that sanctimony can be as physically addictive as any recreational drug, and as destabilizing. “A relentless addiction to indignation may be one of the chief drivers of obstinate dogmatism,” he writes. . . .
Barbara Oakley, an associate professor of engineering at Oakland University in Michigan and an editor of the new volume, said in an interview that when she first began talking about its theme at medical or social science conferences, “people looked at me as though I’d just grown goat horns. They said, ‘But altruism by definition can never be pathological.’ ”
To Dr. Oakley, the resistance was telling. “It epitomized the idea ‘I know how to do the right thing, and when I decide to do the right thing it can never be called pathological,’ ” she said.
. . .
Yet given her professional background, Dr. Oakley couldn’t help doubting altruism’s exalted reputation. “I’m not looking at altruism as a sacred thing from on high,” she said. “I’m looking at it as an engineer.”