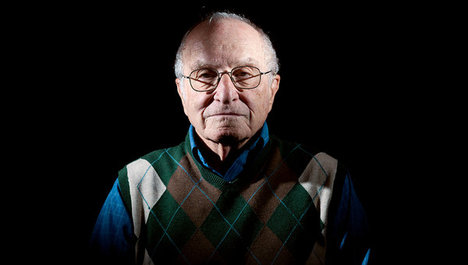 “INVENTOR Paul Polak creates cheap and effective devices to help the poor.” Source of caption and photo: online version of the NYT article quoted and cited below.

(p. D4) If necessity is the mother of invention, Paul Polak is one of its fathers.

For 30 years Dr. Polak, a 78-year-old former psychiatrist, has focused on creating devices that will improve the lives of 2.6 billion people living on less than $2 a day. But, he insists, they must be so cheap and effective that the poor will actually buy them, since charity disappears when donors find new causes.
Inventing a new device is only the beginning, he says; the harder part is finding dependable manufacturers and creating profitable distributorships. The “appropriate technology” field, he argues, is “dominated by tinkerers and short of entrepreneurs.”
His greatest success has been a treadle pump that lets farmers raise groundwater in the dry season, when crops fetch more money. He has sold more than two million, he said.
. . .
Q. What got you interested in poverty?
. . .
Q. And in third-world poverty?
A. My wife’s a Mennonite, and they had programs in Bangladesh. It had hit me between the eyes that homeless people in Denver were living on $500 a month, but there were people overseas living on $30 a month. So I took a trip to Bangladesh.
Some farmers were using hand pumps, but biomechanically, that’s a lousy way to raise water. A Mennonite guy had invented a rower pump that would pull up enough to water a half-acre of vegetables. They had installed 2,000 over five years, and those farmers seemed to be making a lot of money, so I said, “Why don’t we do a project, with an objective of selling 25,000 a year?”
We hit that pretty quickly. One or two Mennonites objected — they considered the idea of selling something to poor people immoral. But we kept at it, and then we found the treadle pump. It was brilliantly simple, it could be manufactured by local workshops, and a local driller could dig a 40-foot well and install it for $25. Studies showed that farmers made $100 in one season on that investment.
We talked to 75 little welding shops where they make things like bedsprings, and jawboned them into making treadle pumps. We went to people who sold things like toilet bowls, and cut a deal with them to be dealers. We trained 3,000 tinkerers to be well-drillers. We hired troubadours to write songs about treadle pumps, and we’d pass out leaflets when they performed. We even produced a 90-minute Bollywood movie.
. . .
Q. What’s the biggest mistake aid agencies make?
A. As we were developing our pump, the World Bank was subsidizing deep-well diesel pumps that could cover 40 acres. The theory was that you’d get a macroeconomic benefit, but it was also very destructive to social justice. The big pumps were handed out by government agents; the government agent was bribeable. The pump would go to the biggest landholder, and he’d become a waterlord.

Q. There have been some well-known failures in this field, like One Laptop Per Child and the Playpump. Can you say why?
A. The laptop was a middle-class device that doesn’t communicate with people who don’t read and write. It cost $100, plus it used the charity model — buy two, give one away. The Playpump, which was a children’s merry-go-round that pumps water, cost $11,000. Women in Africa walk for hours to a well, and then jiggle the pump handle for 60 seconds. This replaces the jiggling. How important is that? And they break. For $11,000, you could dig five wells and eliminate the walk.

Q. What are your principles for success?
A. In 1981, I said, “I’m going to interview 100 $1-a-day families every year, come rain or shine, and learn from them first.”
Over 28 years, I’ve interviewed over 3,000 families. I spend about six hours with each one — walking with them through their fields, asking what they had for breakfast, how far their kids walk to school, what they feed their dog, what all their sources of income are. This is not rocket science. Any businessman knows this: You’ve got to talk to your customers.