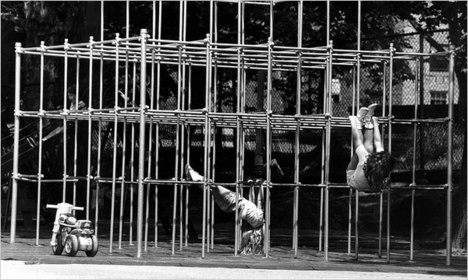 “CHILDHOOD RELIC; Jungle gyms, like this one in Riverside Park in Manhattan, have disappeared from most American playgrounds in recent decades.” Source of caption and photo: online version of the NYT article quoted and cited below.

(p. D3) “There is no clear evidence that playground safety measures have lowered the average risk on playgrounds,” said David Ball, a professor of risk management at Middlesex University in London. He noted that the risk of some injuries, like long fractures of the arm, actually increased after the introduction of softer surfaces on playgrounds in Britain and Australia.

“This sounds counterintuitive, but it shouldn’t, because it is a common phenomenon,” Dr. Ball said. “If children and parents believe they are in an environment which is safer than it actually is, they will take more risks. An argument against softer surfacing is that children think it is safe, but because they don’t understand its properties, they overrate its performance.”
Reducing the height of playground equipment may help toddlers, but it can produce unintended consequences among bigger children. “Older children are discouraged from taking healthy exercise on playgrounds because they have been designed with the safety of the very young in mind,” Dr. Ball said. “Therefore, they may play in more dangerous places, or not at all.”
Fear of litigation led New York City officials to remove seesaws, merry-go-rounds and the ropes that young Tarzans used to swing from one platform to another. Letting children swing on tires became taboo because of fears that the heavy swings could bang into a child.
“What happens in America is defined by tort lawyers, and unfortunately that limits some of the adventure playgrounds,” said Adrian Benepe, the current parks commissioner.