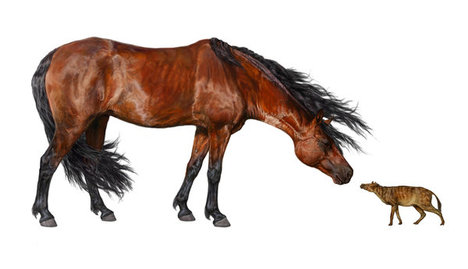 “Artist’s reconstruction of Sifrhippus sandrae (right) touching noses with a modern Morgan horse (left) that stands about 5 feet high at the shoulders and weighs approximately 1000 lbs.” Source of caption and photo: online version of the NYT article quoted and cited below.

(p. D3) The horse (siff-RIP-us, if you have to say the name out loud) lived in what is still horse country, in the Bighorn Basin of Wyoming, where wild mustangs roam.
. . .
Its preserved fossils, abundant in the Bighorn Basin, provide an excellent record of its size change over a 175,000-year warm period in the Earth’s history known as the Paleocene-Eocene thermal maximum, when temperatures are estimated to have risen by 9 to 18 degrees Fahrenheit at the start, and dropped again at the end.
Scientists have known that many mammals appear to have shrunk during the warming period, and the phenomenon fits well with what is known as Bergmann’s rule, which says, roughly, that mammals of a given genus or species are smaller in hotter climates.
Although the rule refers to differences in location, it seemed also to apply to changes over time. But fine enough detail was lacking until now.
In Science, Ross Secord, of the University of Nebraska-Lincoln; Jonathan Bloch, of the Florida Museum of Natural History at the University of Florida in Gainesville; and a team of other researchers report on the collection and analysis of Sifrhippus fossils from the Bighorn Basin.
They report that the little horse got 30 percent smaller over the first 130,000 years, and then — as always seems to happen with weight loss — shot back up and got 75 percent bigger over the next 45,000 years.
. . .
“It seems to be natural selection,” said Dr. Secord. He said animals evolved to be smaller during warming because smaller animals did better in that environment, perhaps because the smaller an animal is, the easier it is to shed excess heat.