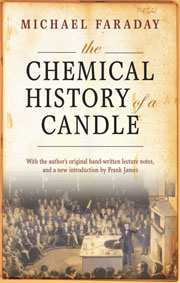 (p. C6) Michael Faraday is one of the most beguiling and lovable figures in the history of science. Though he could not understand a single equation, he deduced the essential structure of the laws of electromagnetism through visualization and physical intuition. (James Clerk Maxwell would later give them mathematical form.) Albert Einstein kept a picture of Faraday over his desk, for Einstein also thought of himself primarily as a visual and physical thinker, not an abstract mathematician.
. . .
Faraday’s text is still charming and rich, a judgment that few popular works on science could sustain after so many years. Though he addresses himself to an “auditory of juveniles,” he calls for his audience to follow a close chain of reasoning presented through a series of experiments and deductions.
. . .
. . . : “In every one of us there is a living process of combustion going on very similar to that of a candle,” as Faraday illustrates in his experiments.
In his closing, he turns from our metabolic resemblance to a candle to his deeper wish that “you may, like it, shine as lights to those about you.”