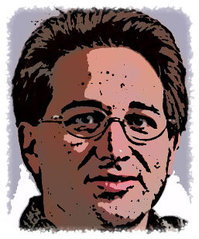 “Scott Aaronson.” Source of caption and photo: online version of the NYT commentary quoted and cited below.

(p. D5) When people hear that I work on quantum computing — one of the most radical proposals for the future of computation — their first question is usually, “So when can I expect a working quantum computer on my desk?” Often they bring up breathless news reports about commercial quantum computers right around the corner. After I explain the strained relationship between those reports and reality, they ask: “Then when? In 10 years? Twenty?”

Unfortunately, this is sort of like asking Charles Babbage, who drew up the first blueprints for a general-purpose computer in the 1830s, whether his contraption would be hitting store shelves by the 1840s or the 1850s. Could Babbage have foreseen the specific technologies — the vacuum tube and transistor — that would make his vision a reality more than a century later? Today’s quantum computing researchers are in a similar bind. They have a compelling blueprint for a new type of computer, one that could, in seconds, solve certain problems that would probably take eons for today’s fastest supercomputers. But some of the required construction materials don’t yet exist.
. . .
While code-breaking understandably grabs the headlines, it’s the more humdrum application of quantum computers — simulating quantum physics and chemistry — that has the potential to revolutionize fields from nanotechnology to drug design.
. . .
Like fusion power, practical quantum computers are a tantalizing possibility that the 21st century may or may not bring — depending on the jagged course not only of science and technology, but of politics and economics.