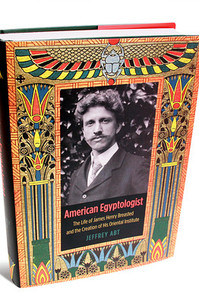 (p. A13) Over the next three decades, Breasted would excavate a series of sites in Egypt, the Sudan and the Near East. He would also develop an important ability to identify rich and influential benefactors and to gain their confidence without resorting to sycophancy. . . . Notable among the Maecenas figures he cultivated was John D. Rockefeller.

Rockefeller had been an early patron of the University of Chicago; he might have done something for Near Eastern studies in any case, but it is clear that without Breasted’s energy and enthusiasm, Rockefeller’s scholarly philanthropy would never have taken the course it did. Eventually, he provided the funding for an entire Oriental Institute in 1931. (The OI, as it is affectionately known, had existed from 1919 but essentially as a concept between academic committees.) Together with its Egyptian offshoot, Chicago House, the OI is perhaps the leading center of Egyptology and Assyriology in the world. At the moment, on both sides of the Atlantic, we are hearing a lot about the evils of bankers and capitalism, but as far as I know no street protester has yet endowed a university department.

For the full review, see:
JOHN RAY. “BOOKSHELF; From Illinois To Mesopotamia; Excavating sites in Egypt and the Near East, writing groundbreaking books and developing a talent for courting wealthy donors.” The Wall Street Journal (Thurs., February 23, 2012): A13.
(Note: ellipsis added.)

Book under review:
Abt, Jeffrey. American Egyptologist: The Life of James Henry Breasted and the Creation of His Oriental Institute. Chicago: University of Chicago Press, 2012.