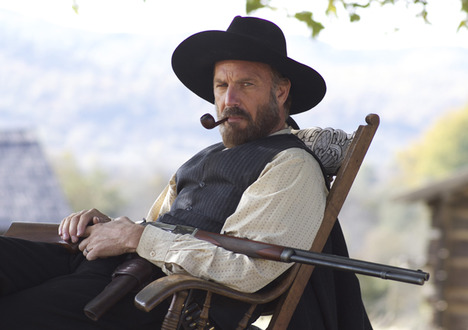 Kevin Costner as the patriarch of the Hatfield clan on the HBO miniseries. Source of photo:
http://www.cowboysindians.com/Blog/May-2012/Blasts-From-Our-Past-With-Kevin-Costner/costner-hatfield.jpg

Kevin Costner plausibly suggests that when the productive activities of capitalism and entrepreneurship are not available or sought, people are more likely to let annoyances lead to violence:

K.C. It’s fair to say that the economics of the time were the provocateurs in this story. I think there was a moment when Hatfield and McCoy would have laid down their guns. But these young guys didn’t have jobs anymore as we moved toward industrialization. They started to have children, and their families doubled in size, and suddenly they had to feed 26. Young men killing young men — it really has a lot to do with the offspring not having enough to do. Look, you’re talking about alcohol and guns, and you’re talking about unemployment, so there’s a reason for the bitterness.

For the full interview, see:
Kathryn Shattuck, interviewer. “Firing Bullets Across a Border And a Bloodline.” The New York Times, Arts&Leisure Section (Sun., May 27, 2012): 15.
(Note: bold in original.)