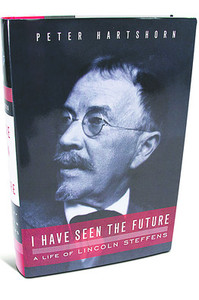 (p. 29) As one of the original “muckrakers,” Steffens wrote newspaper and magazine exposés that gave journalism a new purpose, . . .
. . .
He learned to write and to invest, and within nine years was the managing editor of McClure’s, one of the most popular and prestigious magazines in the country.
He was, as usual, in the right place at the right time. Volatile Sam McClure was transforming his namesake publication into a journal that would rip the veil from American life, forcing readers to confront the corruption that had seeped into every seam of their democracy. The January 1903 issue alone featured an installment of Ida Tarbell’s groundbreaking history of the Standard Oil Company; . . .
. . .
He managed to remain friends with Roosevelt and then Woodrow Wilson . . .
. . .
Intrigued by Mussolini, Steffens was captivated by Lenin, whom he interviewed briefly during the revolution. He became one of the first of that sad little band of Western intellectuals who fell head over heels for the Soviet Union. Unlike most of them, he did not deny the stories of atrocities leaking out of the workers’ paradise. Even more chilling, he simply believed them necessary to bring about the great changes to come. He never wavered from his infamous first impression of the U.S.S.R., “I have seen the future, and it works.” Instead, living comfortably on money he made from the stock market, he insisted that “nothing must jar our perfect loyalty to the party and its leaders,” and that “the notion of liberty . . . is false, a hangover from our Western tyranny.”

For the full review, see:
KEVIN BAKER. “Lincoln Steffens: Muckraker’s Progress.” The New York Times Book Review (Sun., May 15, 2011): 29.
(Note: ellipses added except for the one inside the last quoted paragraph.)
(Note: the online version of the article has the date May 13, 2011.)

The book under review is:
Hartshorn, Peter. I Have Seen the Future: A Life of Lincoln Steffens. Berkeley, CA: Counterpoint, 2011.