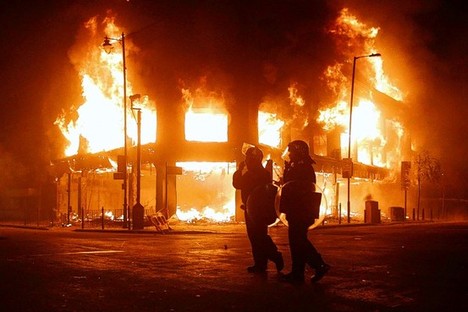 “As unrest flared in the U.K. on Aug. 7, fire raged through a building in Tottenham, north London–an area also the scene of riots 26 years ago.” Source of caption and photo: online version of the WSJ article quoted and cited below.

(p. A8) LONDON–After furious race riots broke out in London’s Tottenham area 26 years ago, government and local authorities poured millions of pounds into the district and especially Broadwater Farm estate, a notorious housing project that was the epicenter of the 1985 unrest.

Yet last week, Tottenham returned to an unwelcome spotlight as the point of ignition for riots here–and this time the unrest spread far beyond the neighborhood, to other parts of London and distant cities like Birmingham and Manchester.
What started as a peaceful protest over the killing of a local man by police was quickly seized on as an excuse for looting, arson and other unruly behavior by roaming packs of people that gripped the country for days. The result as of Sunday night: 1,401 arrests nationwide and a debate over who is to blame and how to prevent it happening again.
Tottenham’s repeat appearance in the rioting shows the sometimes limited effectiveness of urban-regeneration programs that fail to tackle the deep-seated problems of poor communities. The state largesse lavished on Tottenham has resulted in better facilities and nicer surroundings, yet the area is still blighted by high unemployment, a thriving gang culture and social breakdown, according to official data.