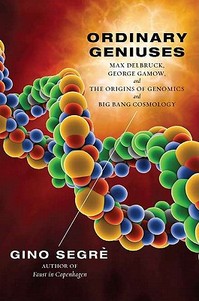 (p. C9) In the summer of 1953, while visiting Berkeley, Gamow was shown a copy of the article in Nature where Watson and Crick spelled out some of the genetic implications of their discovery that DNA is structured as a double helix. He immediately realized what was missing. Each helix is a linear sequence of four molecules known as bases. The sequence contains all the information that guides the manufacture of the proteins from which living things are made. Proteins are assembled from 20 different amino acids. What is the code that takes you from the string of bases to the amino acids? Gamow seems to have been the first to look at the problem in quite this way.

But he made a physicist’s mistake: He thought that the code would be “elegant”–that each amino acid would be specified by only one string of bases. (These strings were dubbed “codons.”) He produced a wonderfully clever code in which each codon consisted of three bases. That was the only part that was right. In the actual code sometimes three different codons correspond to the same amino acid, while some codons do not code for an amino acid at all. These irregularities are the results of evolutionary stops and starts, and no amount of cleverness could predict them.