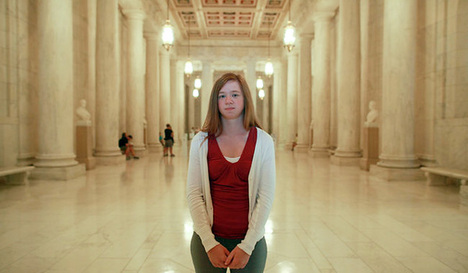 “Abigail Fisher, 22, at the Supreme Court last month. “I probably would have gotten a better job offer had I gone to U.T.,” Ms. Fisher said.” Source of caption and photo: online version of the NYT article quoted and cited below.

(p. A1) WASHINGTON — Abigail Fisher is a slight young woman with strawberry blond hair, a smile that needs little prompting, a determined manner and a good academic record. She played soccer in high school, and she is an accomplished cellist.

But the university she had her heart set on, the one her father and sister had attended, rejected her. “I was devastated,” she said, in her first news interview since she was turned down by the University of Texas at Austin four years ago.
Ms. Fisher, 22, who is white and recently graduated from Louisiana State University, says that her race was held against her, and the Supreme Court is to hear her case on Wednesday, bringing new attention to the combustible issue of the constitutionality of racial preferences in admissions decisions by public universities.
“I’m hoping,” she said, “that they’ll completely take race out of the issue in terms of admissions and that everyone will be able to get into any school that they want no matter what race they are but solely based on their merit and if they work hard for it.”
. . .
(p. A17) The majority opinion in the Grutter case, written by Justice Sandra Day O’Connor, rejected the use of racial quotas in admissions decisions but said that race could be used as one factor among many, as part of a “holistic review.” Justice O’Connor retired in 2006, and her replacement by Justice Samuel A. Alito Jr. may open the way for a ruling cutting back on such race-conscious admissions policies, or eliminating them.
. . .
She said she was trying to come to terms with her role in a case that could reshape American higher education. Asked if she found it interesting or exciting or scary, she said, “All of the above.”
But she did not hesitate to say how she would run an admission system. “I don’t think,” she said, “that we even need to have a race box on the application.”

One thought on “Abigail Fisher “Devastated” by “Holistic Review””