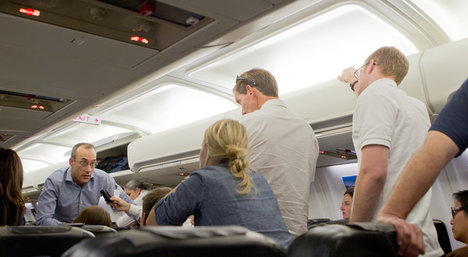 “Dan Senor, left, a leading campaign adviser, at a briefing on Saturday for the Romney campaign on the plane en route to Israel.” Source of caption and photo: online version of the NYT article quoted and cited below.

(p. A10) WASHINGTON — Moments after making remarks in Jerusalem about Middle East culture that enraged Palestinians and undermined the public relations value of his trip to Israel, Mitt Romney looked around the room for Dan Senor, one of his campaign’s top foreign policy advisers.

It was Mr. Senor’s book about entrepreneurs in Israel that informed his comments, Mr. Romney explained to the group of Jewish-American donors he had assembled at the King David hotel. The book, “Start-up Nation,” is among Mr. Senor’s writings that Mr. Romney frequently cites in public. 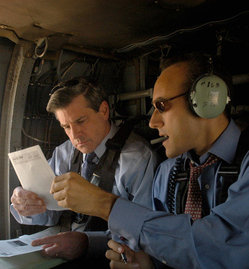 “L. Paul Bremer III, left, in 2004 when he was the top United States envoy in Iraq, with Mr. Senor, who was his spokesman.” Source of caption and photo: online version of the NYT article quoted and cited above.