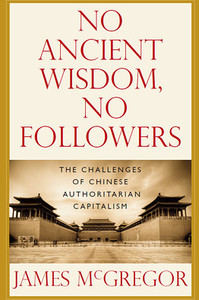 In the passages quoted below “SOE” means “state-owned enterprise.”

(p. B1) If the U.S. needs another wake-up call, it will get one this week with the publication of a bracing account of the danger that China’s state capitalism poses to global business–and to China itself. James McGregor’s new book, “No Ancient Wisdom, No Followers: The Challenges of Chinese Authoritarian Capitalism,” dissects the complex policies and state structures that produced China’s novel system. And it describes the limited recourse the U.S. and other nations have. (Full disclosure: Mr. McGregor is a friend and former colleague at the Journal.)

“The Communist Party of China has two unwavering objectives: Make China rich and powerful and guarantee the Party’s political monopoly,” Mr. McGregor writes. “At the center of this are behemoth state-owned enterprises that dominate all key sectors and have been instrumental to the country’s current success.
“As China’s global reach expands, this one-of-a-kind system is challenging the rules and organizations that govern global trade as well as the business plans and strategies of multinationals around the globe. At the same time, the limits of authoritarian capital-(p.B2)ism are increasingly evident at home, where corruption is endemic, the SOEs are consuming the fruits of reform, and the economic engine is running out of gas.”
Born in the 1950s when 10,000 Soviet advisers helped China organize central planning, the state-owned enterprises quickly became bloated extensions of the Party’s patronage and power.
. . .
The enterprises themselves, meanwhile, crowded out private competition. SOEs account for about 96% of China’s telecom industry, 92% of power and 74% of autos. The combined profit of China Petroleum & Chemical and China Mobile in 2009 alone was greater than all the profit of China’s 500 largest private firms, Mr. McGregor writes.
An independent Chinese study, he adds, says that if you subtract government subsidies from the biggest SOEs they actually lose money.
Mr. McGregor believes pressures are building within China for change–the result of SOEs that don’t innovate enough, slowing growth, an angry private sector, and a pending leadership change, among other factors. Even some top leaders say reform is needed.