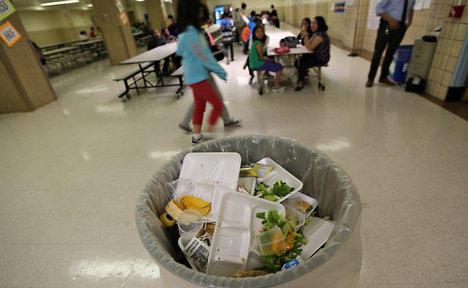 “Lunch hour at Middle School 104 in Manhattan, where, on Friday, several seventh graders pronounced vegetables “gross.” Source of caption and photo: online version of the NYT article quoted and cited below.

(p. A1) Outside Pittsburgh, they are proclaiming a strike, taking to Twitter and Facebook to spread the word. In a village near Milwaukee, hundreds staged a boycott. In a small farming and ranching community in western Kansas, they have produced a parody video. And in Parsippany, N.J., the protest is six days old and counting.

They are high school students, and their complaint is about lunch — healthier, smaller and more expensive than ever.
The Healthy, Hunger-Free Kids Act of 2010, which required public schools to follow new nutritional guidelines this academic year to receive extra federal lunch aid, has created a nationwide version of the age-old parental challenge: persuading children to eat what is good for them.
Because the lunches must now include fruits and vegetables, those who clamor for more cheese-laden nachos may find string beans and a peach cup instead. Because of limits on fat and sodium, some of those who crave French fries get baked sweet-potato wedges. Because of calorie restrictions, meat and carbohydrate portions are smaller. Gone is 2-percent chocolate milk, replaced by skim.
“Before, there was no taste and no flavor,” said Malik Barrows, a senior at Automotive High School in Brooklyn, who likes fruit but said his classmates threw away their mandatory helpings on the cafeteria floor. “Now there’s no taste, no flavor and it’s healthy, which makes it taste even worse.”
Students organized lunch strikes in a suburb of Pittsburgh, where in late August the hashtag “brownbagginit” was trending on Twitter, and outside Milwaukee, where the Mukwonago High School principal, Shawn McNulty, said participation in the lunch program had fallen 70 percent.
. . .
(p. A3) In Sharon Springs, Kan., lunch protesters at Wallace County High School posted a video on YouTube, “We Are Hungry”; in it, students faint in the hallways and during physical education class, acting as if they had been done in by meager helpings of potato puff casserole and chicken nuggets. To the tune of the song “We Are Young” by Fun, one student on the video sings, “My friends are at the corner store, getting junk so they don’t waste away.”
Since it was uploaded three weeks ago, “We Are Hungry” has had nearly 900,000 views.
Callahan Grund, a junior who stars in the video, said, “My opinion as a young farmer and rancher is that we produced this protein and it’s not being used to its full advantage.” He wakes up early every morning to do chores, stays after school for two hours of football practice and returns home for another round of chores. If it were not for the lunches his mother now packs him, he said, he would be hungry again just two hours after lunch.
In New York City, where school officials introduced whole-wheat breads, low-fat milk and other changes several years ago, the most noticeable change this year is the fruit and vegetable requirement, which has resulted in some waste, according to Eric Goldstein, the Education Department official who oversees food services. It is not hard to see why. At Middle School 104 in Gramercy Park on Friday, several seventh graders pronounced vegetables “gross.”
“I just throw them out,” said Danielson Gutierrez, 12, carrying a slice of pizza, which he had liberally sprinkled with seasonings, and a pear. He also offered his opinion on fruit: “I throw them out, too. I only like apples.” 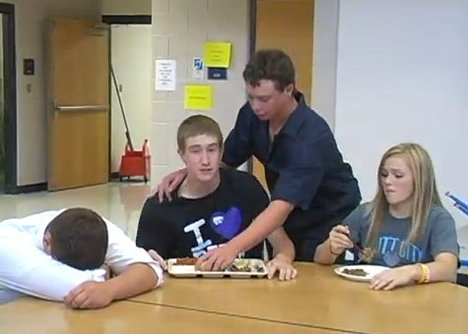 “Dissatisfied with healthier school lunches, some Kansas students made a video parody.” Source of caption and photo: online version of the NYT article quoted and cited above.