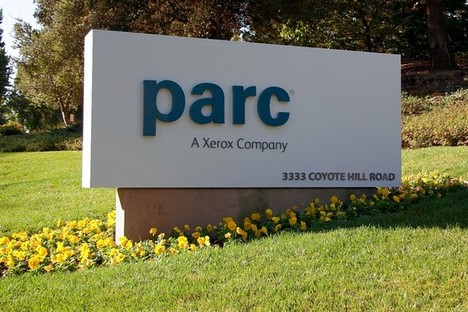 “Xerox PARC headquarters.” Source of caption and photo: online version of the WSJ article quoted and cited below.

(p. A11) A telling moment in the presidential race came recently when Barack Obama said: “If you’ve got a business, you didn’t build that. Somebody else made that happen.” He justified elevating bureaucrats over entrepreneurs by referring to bridges and roads, adding: “The Internet didn’t get invented on its own. Government research created the Internet so that all companies could make money off the Internet.”
. . .
Robert Taylor, who ran the ARPA program in the 1960s, sent an email to fellow technologists in 2004 setting the record straight: “The creation of the Arpanet was not motivated by considerations of war. The Arpanet was not an Internet. An Internet is a connection between two or more computer networks.”
If the government didn’t invent the Internet, who did? Vinton Cerf developed the TCP/IP protocol, the Internet’s backbone, and Tim Berners-Lee gets credit for hyperlinks.
But full credit goes to the company where Mr. Taylor worked after leaving ARPA: Xerox. It was at the Xerox PARC labs in Silicon Valley in the 1970s that the Ethernet was developed to link different computer networks. Researchers there also developed the first personal computer (the Xerox Alto) and the graphical user interface that still drives computer usage today.
According to a book about Xerox PARC, “Dealers of Lightning” (by Michael Hiltzik), its top researchers realized they couldn’t wait for the government to connect different networks, so would have to do it themselves. “We have a more immediate problem than they do,” Robert Metcalfe told his colleague John Shoch in 1973. “We have more networks than they do.” Mr. Shoch later recalled that ARPA staffers “were working under government funding and university contracts. They had contract administrators . . . and all that slow, lugubrious behavior to contend with.”

For the full commentary, see:
Gordon Crovitz. “INFORMATION AGE; Who Really Invented the Internet?” The Wall Street Journal (Mon., July 23, 2012): A11.
(Note: ellipsis between paragraphs was added; ellipsis internal to last paragraph was in original.)
(Note: the online version of the commentary has the date July 22, 2012.)

I read the Hiltzik book several years ago, and my memory of it is not sharp, but I remember thinking that it was a useful book:
Hiltzik, Michael A. Dealers of Lightning: Xerox PARC and the Dawn of the Computer Age. New York: HarperBusiness, 1999.